“NOTE: The below post was originally written and published on GestaltIT.com as part of a sponsored content series with Pure Storage.”

I’ve done some research into POSIX storage (Portable Operating System Interface) which is really centered around the High-Performance computing world, and works most well in Unix environments. In concept, a POSIX environment specializes in the concurrent reads and writes into the storage environment. In HPC, the world must rely on a couple of key details, those are very fast transactions, and of course scalability. The limitations have always stemmed from the speed of disc, and the interconnect on that side, in terms of performance. Also, a key factor in the relevance of these file-systems is how the metadata is leveraged such that performance isn’t limited. Then, in terms of scalability: while there’s been much done, the growth in storage has quite regularly relied also on the growth of performance driving that storage.

VastData has achieved remarkable function in the growth of both those key categories. 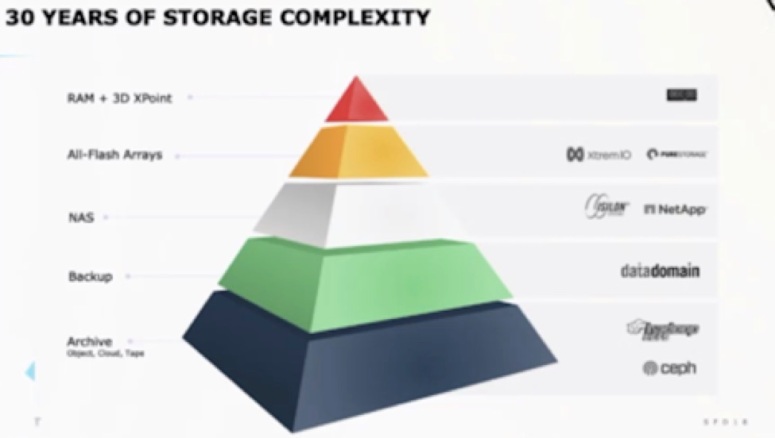 As you can see, the architecture is designed around the idea that all data, regardless of its traditional location within the storage environment, including all levels of the pyramid can be handled by the varying levels of performance, and overlaid file-system types that can be approached by the Vast architecture. The Universal File System (UFS) is critical to the support of variable blocks in the storage infra, but also allows for one global namespace to be able to support variable block dedupe, and maintain that functionality within the compute layer rather than the storage layer.

Ultimately, I’m finding the architecture to be both modern and to address key limitations that have existed within Posix for a long time. To be fair, when Howard Marks (@DeepStorageNet) joins a startup as the tech evangelist, one must stand up and take notice.

So, in my opinion, particularly as a launch from Stealth, this was a particularly compelling presentation of a particularly interesting piece of storage tech. To gain some deeper knowledge than this posting, please get yourself over to the Tech Field Day youtube channel here. You will be entertained and educated.

One thought on “#SFD18 introduces us to VASTData”